The limestone walls of coastal and mountain supramonte made Cala Gonone and Dorgali one of the most frequented destination for climbing. The climbing can be made on different routes, equipped and not, with variable difficulties and with varying degrees of exposure. The best time for climbing are spring and autumn, but this sport can be practiced all year thanks to the climate mitigated by the sea.

Updates from the Enrico Rock page on the status of the routes. You can find Enrico Rock on facebook for assistance on climbing in Cala Gonone

Updates from the Enrico Rock page on the status of the routes. You can find Enrico Rock on facebook for assistance on climbing in Cala Gonone

Two years have passed since the last fuss that exploded about the precarious and risky situation of many sport climbing routes in the cliffs of Cala Gonone.
Someone even went so far as to write that "hanging from the anchors of the streets can cause death" ...
The crags in question were above all those closest to the sea, where there have already been episodes of anchor failure in the past, with related accidents and injuries, fortunately never serious or fatal, there could be something true ...
However, it is necessary to update and inform fans of this discipline and local tour operators on the current situation ... Year 2021.
First of all, it must be emphasized that all the work done to date is AS ALWAYS thanks to the effort, risk, at their own economic expense, of climbers, who, although not operating as coordinated entities, are securing the busiest areas in the area.
Let's start from one of the "marine" cliffs, considered among the most dangerous, considering the visibly disastrous state of many anchors, and where there have been cases of breakage due to the subtle phenomenon of galvanic currents, which corrode the fixes on the inside, leaving them apparently perfect on the outside. Biddiriscottai.
These spectacular walls, set in a decidedly beautiful place, are certainly not the favorites of us locals, as there is a slippery rock, but they are among the most popular with foreign climbers.
In addition to the sixty single pitches, there are also some multipitch routes.
ASD Climbing Sardinia, in collaboration with the generous Swiss climber Louis Piguet and the mountain guide Mario Ogliengo, has recently retooled with titanium material over 50% of the single pitches and long routes "Alchimista", "La Vita Nuova" , "Innocenti-deviations".
Updates on the website www.climbingsardinia.com
In the nearby Grottone dei Colombi, referred to by climbers as Millennium, the tireless Maurizio Oviglia has retooled some routes with marine stainless steel material and titanium stops.
Updates on the site http://www.pietradiluna.com/millennium-cala-gonone
Oviglia himself is arranging some historic routes in the beautiful sector of Arcadio where some routes had already been recently re-equipped by Eugenio Pinotti and the ASD Ortoblock of Nuoro.
We come to the area of Cala Fuili and Codula. On the beach, most of the routes had already been bolted by Louis Piguet with marine steel resin and last year he completed the work with titanium bolts.
In Codula Fuili the ASD Ortoblock of Nuoro took charge of re-bolting many routes in the sectors, Thailand and Pederiva as well as other pitches at the Satta Ruia crag in Dorgali and at the Tornanti.
Finally, the undersigned, with the help of friends, continued the work of replacing and maintaining several stops, already begun by Piero Fancello, again at the Satta Ruia cliff in Dorgali.
We have also added one or more bolts in the starts on most of the routes and replaced some stops at the Buchi Arta crag.
Several stops have been replaced and arranged in the Ninna Nanna sector, in the Strada Panoramica, in the Margheddie area, where Climbing Sardinia has bolted even the most left routes using titanium.
Recommendations. Climbing in the Cala Luna beach and in the Puschtra sector of Cala Fuili where no maintenance has been done is very, very dangerous!
In conclusion. There is still a lot of work to do and in the composition of this "puzzle" I may have inadvertently left out or forgotten someone and something, but with a big thank you to everyone and a pinch of pride, we can say that compared to two years ago the image offered to the climbers of Cala Gonone, he is regaining the attractive shape he deserves again.
Then Happy Climbing to all! 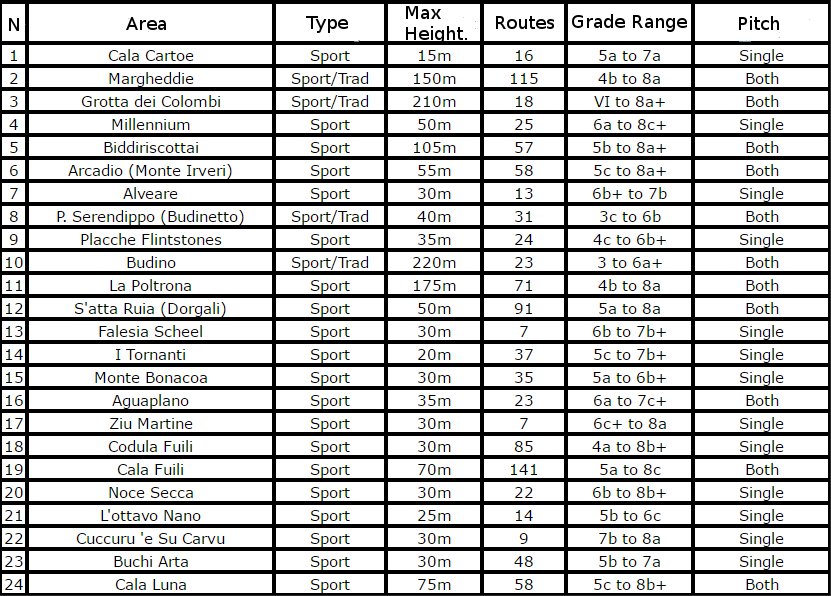