The 2017 edition of the International Folk Festival is one of the most important event of Cala Gonone and Dorgali, in Sardinia. Organized by the “Tiscali - Dorgali” association, it will take place Friday, August 11 at 10.00pm in the elementary school field of Dorgali.

The “Tiscali - Dorgali” association born in 2001 and it's composed of 50 members including students, workers, farmers, teachers, artisans and housewifes. We do a serious and meticulous historical research of the Dorgali's tradition respecting its peculiarities, like the composure and the elegance of the typical costume, worn with its variants and blended with the sobriety and style of our dancing.

We pass down the culture and the experience gained over the years to young people who join us today. For us, these guys are the guarantee that the great cultural and historical treasure of our people will not be lost in the future.

The Tiscali - Dorgali group took part to the most important international folk events; since 2003 it organizes the World Folk Festival, in cooperation with the CIOFF (International Council of Organizations of Folklore Festivals - Brussels headquarter), hosting several folk groups from the 5 continents.

The Pom'Kanel dance group, created in 1984 by the artistic director Albert ALAMELU (nicknamed D'Jessy), is one of the best folkloristic dance band of the Martinique island. The choreographies, characterized by Caribbean and African influences and inspired by the traditional heritage of the Antarctic Islands, have been developed by Jessy and are performed by the most enthusiastic and young dancers, fascinating the many island tourists.

Each year, an important tour organized among Europe, United States, Japan and Canada allows the troupe to export its artistic ability and gain numerous awards. True ambassador of the antique folklore in the world, the Pom'Kanel ballet excellently promotes tourism on the island of Martinique and especially in the city of Basse-Pointe.

The Tungurahua Group was born in 1970 thanks to the work of its artistic director CARLOS QUINDE MANCERO, who devoted his life to promote the culture of Ecuador through music and folk dances. The group works from more than 40 years, spreading Ecuadorian culture and traditions through events in the most important squares of America and Europe. It has been awarded as patrimonial representative by the Municipal Assembly of the National Congress, the Ecuador House of Culture and several international institutions.

The art of the Tungurahua Group is a permanent exhibition of culture, tradition, joy and beauty. Its dances express the strong connection between man and nature, also thanks to the sound of tambourine and pingullo (typical flute of the Ecuadorian region). The feeling, the expression, the cheerfulness and the colorful clothes make up the distinctive features of this group, famous for its choreographies of ancestral movements and rhythm. "Folklore applied to dance, music and choreography returns knowledge, conscience and feeling of membership to homeland": this is the foundation of this activity, recognized internationally as Mouthpiece of Exhibition and Testimony of Ecuadorian Culture.

This group was born in Voronezh in 1958, a large city 470km away from Moscow. The name "LES AURORES DE PRINTEMPS", meaning the Spring Aurora, symbolizes the peppy character of this city. The referents of this group Alla Kholodilova, Serguei Frolov and Tatiana Chichkina are all great experts of the most authentic Russian culture.

Since its inception this group obtained great success on the international scene. The costumes are incredibly rich and varied and the artists of the orchestra use instruments such as "gusli", "domra" and "balalaika" with extraordinary virtuosity.

The program extends from the Russian traditional dances to majestic round ones, similar to the court dances. Suddenly the girls of the western regions open the curtain and the magic starts: smiling faces, lively dresses and dances will make us appreciate the popular Russian arts and tradition.

The National Dance Ensemble project is a group of folk dancers, acrobats and musicians of Nairobi, the capital of Kenya known as the city in the sun. The troupe is composed of 35 young artists; our aim is to preserve and recollect the richness of our national heritage through dance and music of more than 42 different ethnicities.
Nairobi dance troupe is unique because it is a composition of artistes from the different tribes of Kikuyu, Kamba, Embu and Meru, Luhya, Luo and Kisii, Maasai and Kalenjin, Giriama and Digo. Our performance is a collection of dances and music from almost all communities in Kenya and other parts of Africa.

The Osilo Folk Group was born in the '50s under the historical guide of "tiu" Pietrino Piga; together with Turra brothers, he brings to light the ancient folk traditions of the country. In the following years, the Group become known in Sardinia taking part in the biggest festivals of the island such as the "Sardinian Ride", the "Festival of the Redeemer" and the celebrations for "Sant'Efisio Martyr".

At the same time it also represents its dresses, dances and traditions outside the island partecipating in National and International (Hagodange in France) events and in the Venice Carnival. Since 2014, the Group organizes the "Colli del Tuffudesu" International Folk Festival and the "Artes and Colores Isolanos" exhibition, inviting several nations including New Zealand, Taiwan and South Africa.

The Osilo's traditional dances are: Ballu Tundu - typical dance of Logudoro characterized by a marked cadence with a diminished; S'Aggesa - called dance of the married couple because, according to tradition, it was evoked by a marriage between an Osilian man and a girl from Aggius; Sa Danza - the dance of courtship, where the man with his austerity tries to conquer his lady; Chirigheddu Pintu - a dance where the man is accompanied by two women.

Osilo's traditional dress is known as "Sa capitta", an exclusive clothing for the wealthy class used for the most important ceremonies. It consists of a smooth skirt (silk velvet), adorned with a silk satin frill decorated with floral motifs, chenille and gold or silver foils. What distinguishes the dress is indeed the headgear called "sa capita", embroidered with floral motifs. Other important parts are the bodice, whose sleeves are closed with 11 silver or gold buttons called "sa buttonera"; Above the bodice there is "s'imbustu", made of thick fabrics embellished by trimmings. A hand-embroidered white tulle veil frames the woman's face. Secondary but not less important are "Sa capitta niedda" and "Sa faldetta covacada".

The man's dress includes "sa berritta", a typical headgear used in almost all dresses, "su entone" - raw linen nightshirt with fine-worked collar and cuffs, "su dossu" - a double breasted waistcoat of black velvet with a white linen rear; "su cappottinu", "Sas calzas biancas" put into the "calzas nieddas", that cover the calf and hide part of the shoes. "Sas ragas", black and pleated skirt. Finally, a thin strip of woven joins the front and the back of the dress, passing under the pants crotch.

The Ortobene Folk Association was born in Nuoro in October 1963 thanks to a group of young people who loved the popular dances. It is currently the oldest group of the city. In 1966 the group took part in two international folklore exhibitions in Germany and, in its city, it won the first prize at the festival of the Redeemer. In the early 1970s the choir section directed by Salvatore Nuvoli joined the newly born Association; since then, the two sections have grown together, participating in numerous events in the island. For some periods there was also the tenores section, which is currently being reconstitute.

The dance section has begun a series of studies on traditional costume and dance and it focused on maintaining their original features, in order to avoid contamination by the surrounding countries. Our association was one of the first to propose again the "old" round dance, as it was performed in the past on weddings or family parties. The search continues today to reproduce the moves and the sounds that accompanied the dances in the last century. Unfortunately, there are only few recorded evidences, so our study is based on memories of the elderly interviewed. On the occasion of the fiftieth anniversary of the group, we produced a brochure of the realized researches with detailed descriptions of costumes and dances.

The male costumes we present are all rebuilt because men, in the past, had only a costume that they brought to the tomb, while there are several original pieces of female ones, handed down by ancestors or often purchased by locals. Women, in fact, used to keep the wedding dress for gala dinners, so they have been preserved better. Our association has realized a scrupulous research for original pieces, trying to faithfully reproduce the pieces used in the early decades of the twentieth century. 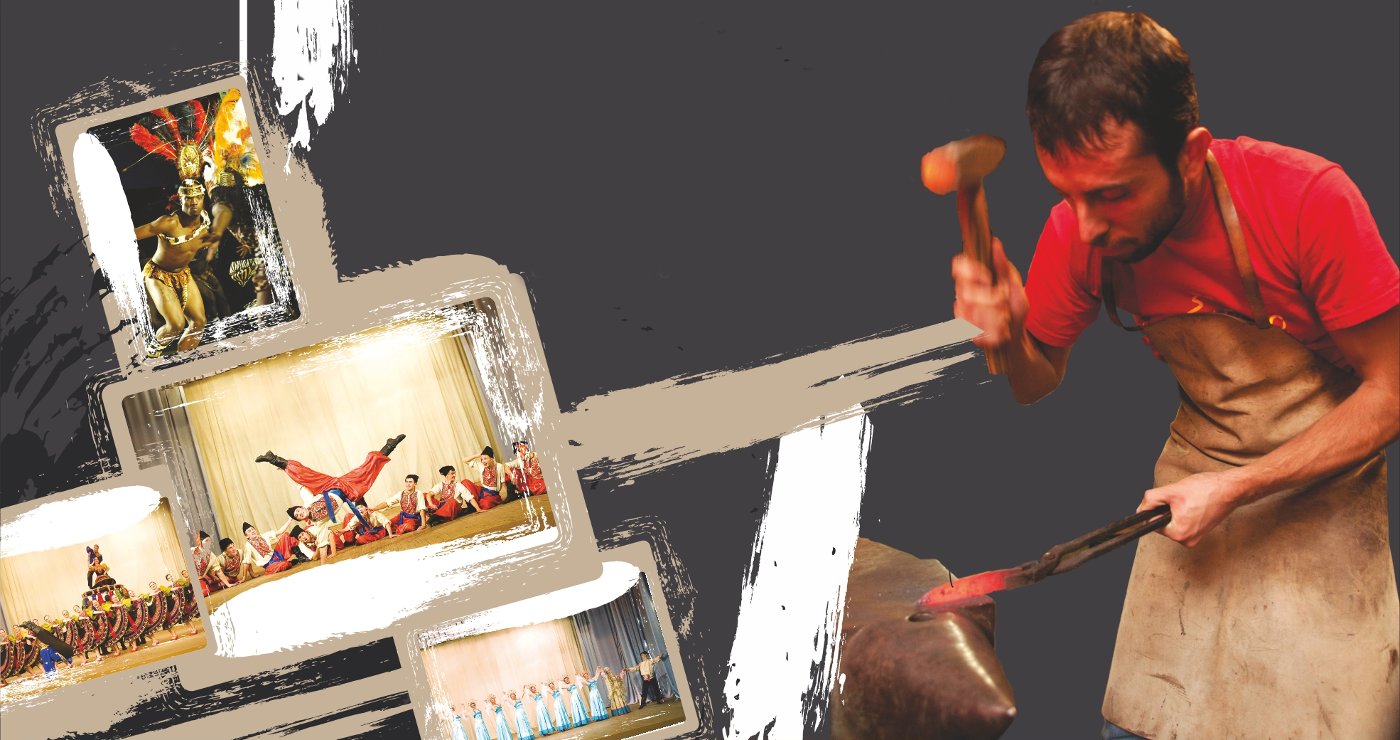 "First of all - the organizers say - we wanted to meet the desire expressed several times by Gianfranco, who spent the last years devoting himself to the ancient art of locksmith and cutler, following the secular family tradition. Second, we wanted to focus the image of Dorgali as home of artisans-artists: pellets, ceramists, carpenters, silversmiths, goldsmiths and masters of forge".

Since the middle of the '700s, Dorgali was one of the few countries in the island where armourers were constructing firearms like the famous sardinian flint arquebus; we find the proof in the historical commercial geographic dictionary of the states of the Sardinia's king (V.Angius e G.Casalis).

In the second half of the nineteenth century many craftsmen stood out in Dorgali for the production of blades and lion-shaped handles, that characterized the famous leppa durgalesa (typical knife of Dorgali). They imported from Spain the famous blades of Toledo, known as "sun stamp" for the pattern stamped on them. They built horn and wood handles, upholstering them with a foil of brass and silver decorated using burin and chisel.

Since 1960 ziu Tattanu Spanu began the evolutionary process that would transform the shepherd knife-tool into a stylish knife, that everyone knows today as "the Dorgalese" one. During these last years many young people have practiced this difficult art, confirming the vocation of the local people to artistic craftsmanship.

The fair will take place on Friday, August 11 at 10.00am in the Elementary School of Dorgali. The Tiscali association will welcome about 50 cutler masters from all over the island; their works will give honor to the country of Dorgali and prestige to the sardinian people.