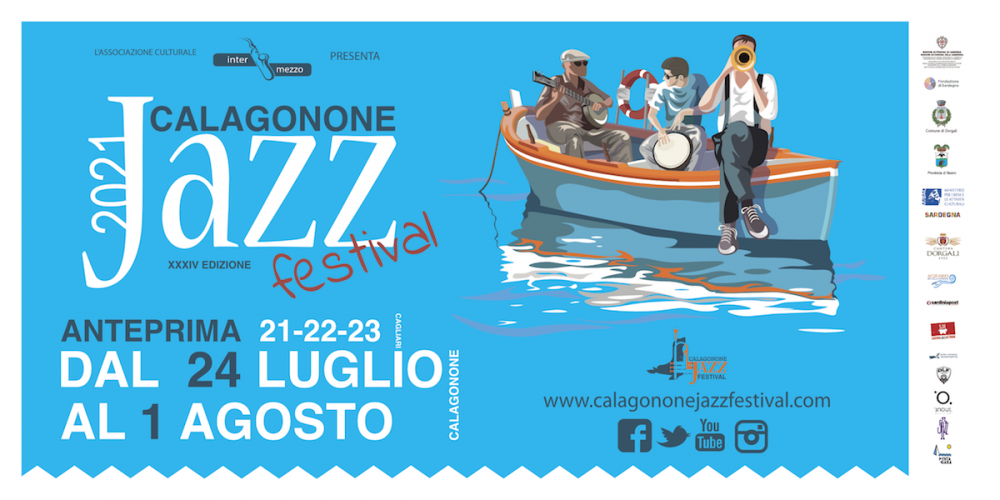 At this link you can check the calendar of the events

A double preview is scheduled for the 32nd edition of the Cala Gonone Jazz Festival in Cagliari and Dorgali.

The Sardinian capital will host, on Thursday 18 July at 21.00 at the EXMA the concert of the Sardinian pianist, transplanted in New York, Alberto Pibiri in trio (Alberto Pibiri – piano, James Cammack – double bass, Adrian Cunningham – clarinet and sax) .

Since the early years the passion for Jazz and listening to Oscar Peterson, Errol Garner and Ahmad Jamal has formed the musical style of Alberto Pibiri.

The starting line will be cut on July 26 at the Cantina di Dorgali at 12.00 with the One Man Band by Orani, busker, citizen of the world and bluesman Andrea Cubeddu “Weak like a Man” celebration of human weakness in the face of claims unstoppable of the contemporary and demanding frenzy.

“Weak like a Man” is a celebration of human weakness.

Modern society has outlined a precise profile of the perfect man, devoid of any defect, self-confident and oriented towards achieving a standardized happiness, given by money and notoriety. In the continuous search for stereotyped virtues, we often forget how much the weakness is to characterize us viscerally.

“Weak like a Man” tells of the struggles that are constantly raging in our soul, of the dramas we face day after day, of the confrontation with others and of the awareness of our limited and innate capacity for failure

Safir Nou is an instrumental music project that ranges from cinematic music, to rock, to world music. Sounds recall Mediterranean landscapes, travel experience, sensory experiences. The Groundless disc released for “Label netlabel” in 2017 had major awards in music magazines in Italy, France and the UK, and some passages in radio 2 (Rai). The band has recently produced a single and video (Sensory overload) and is engaged in the production of the new album.

The Lungomare Palmasera – The Jazz Village, at 9.30 pm the new space used for concerts, exhibitions and tastings, new venue for the evening concerts will host …

Saturday 27th July we will finally sail to the Grotte del Bue Marino at 11.00 where the voice and guitar duo of Elina duni and Rob Luft will perform. Songs of love, loss and departure, Balkan and traditional Albanian music, are a fundamental part of the style of the Tirana singer, in which the melancholy of the sounds of her land give way to the expression of popular songs and songwriting from all over the world.

Songs of love, loss and departure. After two acclaimed albums with his jazz quartet, Elina Duni publishes his most intimate recording to date.

“Amara Terra Mia” by Domenico Modugno and more. The unique and expressive voice of Duni and the skinny arrangements here create a common thread of desire that runs through the whole album.

“Partir” was recorded in La Buissonne Studios in southern France in July 2017 and produced by Manfred Eicher.

The band was born on the initiative of Antonello Franca, historical voice of the Orquestra Havana Club, a very active salsero combo in the 90s, and protagonist of the show “Il Barbaro del Ritmo”, tribute to the Cuban singer-composer Beny Morè co-produced by the Orchestra Jazz from Sardinia a few years ago.

The passion for Cuban sounds and the rediscovery of Brazilian Tropicalism, in addition to an innate propensity for musical contamination, led him to find in Alessandro Zizi, a long-standing accordionist / accordionist in the field of Sardinian folk music and in turn passionate about Brazilian music , an accomplice for the constitution of an electro-acoustic ensemble that expresses the influence that Afro-Cuban percussions have had over the years against all pop music.

The first and obligatory step in the constitutive process was the involvement of Sebastiano Pacifico, a percussionist of recognized Cuban extraction.

Jacopo Careddu, former Scekinà drummer and passionate connoisseur of the Cuban rhythmic tradition, is also part of the original line-up. The next step was to involve young musicians from experiences in Cuban music, reggae, jazz, rock-blues and ethno-folk.

Double concert also for the evening at the Villaggio del Jazz – Lungomare Palmasera at 9.30 pm, whose opening will be entrusted to the two young buskers, Moses Concas (harmonica beatbox) and Andrea Cubeddu.

Immediately after The Allan Harris Band (Allan Harris – vocals and guitar, Kerem Gorsev – piano, Ferit Odman – drums, Kagan Yildiz – bass) whose namesake crooner singer and vocalist quoted from Tony Bennett’s favorites, will drag us into the American song thanks at a rhythm and elegance reminiscent of the great Sinatra and Nat ‘King’ Cole.

It closes on Sunday 28 July with a full day of concerts starting from the morning at the Grotte del Bue Marino at 11.00 with Choro de Rua (Barbara Piperno flute, Marco Ruviaro mandolin and 7-string guitar). The duo, as the name of the formation itself conveys, was born with the purpose of spreading the Choro, that is the instrumental pillar music of the Brazilian tradition, which Piperno and Ruviano bring around the world in festivals or on the street.

The sunset at the Aquarium, at 7.00pm, will be the scenario of the classic jazz of the Superposthardbop 4tet (Massimiliano Dosoli – Clarinets, Andrea Carta Careddu- Drums and percussion Andrea Leone – Tenor Sax, Jonathan Ho – Double bass), born on the initiative of Massimiliano Dosoli and whose repertoire ranges from original compositions to highly revisited arrangements of songs by Ellington and Monk, Jim Black and Julian Lage).

We say good bye to the 2019 edition of the Lungomare Palmasera – The Jazz Village at 9.30 pm with the opening of